Island peak is one of the most famous trekking peaks in Nepal which is also called Imja Tse Peak by local people. The peak is located in the Sagarmatha National Park which is in the eastern Nepal. The elevation of the peak is 6189m above the sea level. Island peak climbing along the Everest Base Camp is one of the longest treks with new and exciting things to explore everyday of trekking.Island peak may not be among the highest peaks but it offers the equal challenges and spectacular views of mountains as other highest peaks. Island peak climbing with EBC offers the majestic views of mountains like Lhotse, Makalu, Ama Dablam and many others. You can also have an exciting and thrilling experience of trekking in Khumbu region.Island Peak Climbing with EBC needs a proper rest and acclimatization day during the trek.  Similarly, you need to do some pre climbing practice sessions to be familiar with the climbing technique and equipment.  The trail is sometimes uphill and sometimes downhill so you need to walk carefully.

Island peak climbing is possible to be done throughout the year except the months of monsoon that is June and August. Every year many trekkers and climbers successfully summit the peak. Doing this trek is not technically difficult. The best time for Island Climbing with EBC is during spring and Autumn. This season is the high season for this trek. Short brief about the season for the climbing are given below:

Spring season(March to early June) is considered the best season for trekking in Island Peak Climbing with EBC. In this season, the temperature is mildly warm in low and moderate in high altitude. During this season, you will have a wonderful landscape of hills and mountains. The forest is covered by pines and beautiful rhododendrons.

Autumn is considered the best season to scale the Island peak. And it is the most popular season for trekking, climbing and travelling in Nepal. In this season, you will have the finest and spectacular view of mountains. The temperatures during this season are moderate and really favorable for trekking and climbing. It is the high peak season for travelling in Nepal so you need to prebook the flight and hotel accommodation.

Trekking in winter is possible only with well prepared equipment and strong determination. Always remember, you need to have a sound physical and mental fitness and expert crew members. Doing this season camp trek is extremely dangerous. Similarly, the tea houses at alpine altitude often get closed during winter due to heavy snowfall, so you must check the availability of teahouses.

Summer in Nepal means monsoon rain for several days causing avalanches and landscapes in some dangerous places. Trekking in Nepal is not favorable in the Summer season. You won’t have a clear view of mountains. Continued rainfall could result in slippery and damage routes.

How difficult is Island Peak Climbing?

Island Peak Climbing with EBC is a long days trek which is about 20 to 21 days. Trekking in the remote area for more than 2 weeks could be very trying. Many trekkers feel the trek is a bit difficult. But the level of difficulty depends upon person to person, time of climbing, walking hours, and many others.before climbing the peak you must be physically and mentally prepared with proper technical and physical training. You need to take the climbing and physical challenges seriously. Similarly, proper acclimatization day needs to be allocated to overcome the oxygen deficiency gradually along the trail. Enough water and healthy food also play a vital role to minimize the difficulty of climbing. The quality of your sleep and fulfillment of rest is also necessary for efficient trekking.Ascending in the first part is Physically very difficult. Trekking through a rough terrain upto 5000m and then rope-up and wear crampons to reach the glacier field. Trekking through the foot of the headwall is the toughest part of this climb. However, fixed lines in the route makes the climb safer. Similarly, maintaining hygiene is also necessary for the successful summit. With strong determination, climbing Island Peak is an easy peak to conquer.

Island Peak Climbing with EBC is a trekking as well as climbing which takes 20 days which begins after spending a exploring day in the capital city of Nepal, Kathmandu. Then the trek starts after the exciting morning flight from Tribhuvan International Airport, Kathmandu to Tenzing-Hillary Airport, Lukla which is known as the gateway to Himalayas. The trekking begins with the descent along the bank of Dudh Koshi River with many numbers of Mani walls, stone carving and prayer flags. We will be trekking through the dense forest of Rhododendron and pines all the way to Phakding and Namche Bazaar.Namche Bazaar is a famous Sherpa Kingdom which is a perfect place to spend a night and spend the day hiking to Everest View Hotel, Syangboche, and many other places. After spending 2 nights in Namche Bazaar we will trek to Everest base Camp and Kala Patthar via Dingboche, Tengboche, Lobuche and Gorakshep. Along the way, you will find many Sherpa communities which are famous for Buddhist culture and traditions practiced. Then we will trek back to Dingboche for the further trek. The trail then goes straight forward towards Island Peak Camp which stands at the altitude of 6,189m above the sea level. Trekking up to 5600m is not so difficult and after that we trek from rocky steps and canyon. The steep ascent resulted in the climb being difficult and challenging.After the successful summit of Island Peak along the Everest Base Camp we return to Lukla from the same trail. Then we will trek a morning flight to Kathmandu with spectacular mountain views with some unforgettable lifetime experience.

The day begins early as we make our way to Lukla which houses one of the most thrilling airstrips you will land on. The 45 minute flight is a pleasant one taking us to the home of the Himalayas the snowy summits shining from up above. After a brief rest at Lukla, we begin our journey along the Dudh Koshi River. Enjoying the fresh Himalayan air the journey takes us towards Chheplung village continuing north towards Phakding. Overnight in Phakding.

The journey is a pleasant one as we head towards Namche Bazaar. The trail leading out of Phakding takes on the lush green forests adorned with pine and cedar trees moving through vibrant hamlets including Monjo and Jorsalle. Monjo also marks our entry into the Sagarmatha National Park as we ascend through the hilly trail reaching Namche in time to witness stunning views of Thamserku (6,608m) and Kongde Ri (6,187m). Overnight in Namche.

Today, we take a day off at Namche Bazaar to let our bodies acclimatize with the increasing altitude. Namche boasts a host of possible destinations beginning with the hamlets of Khumjung and Khunde towards the north. The hamlet of Khumjung hosts the Yeti Skull Monastery which is believed to house the skull of a real life yet. Another popular alternative in the Everest region is to trek to Everest View Hotel. The hotel and its premise offer a panoramic display of the Himalayas including the Mt. Everest (8848m) on a day with clear skies. Overnight in Namche.

On the fourth day, Take your breakfast and head towards Tengboche Monastery. The total distance between Namche and Tengboche is 10.4km and also takes 4 to 5 hours. Witness the beautiful Tengboche monastery here and see the majestic mountain view Pumori, Nuptse, Lhoste. Overnight stay at Tengboche.

On the fourth day, Move towards Dingboche which is almost 12 km far from Tengboche. The total walking hours can be 5 to 6 hours to reach Dingboche. You can witness the views of Himalayan peaks like Tawache, Ama Dablam, Kong Mats, etc on the way. Overnight stay at Dingboche.

On the sixth day, You will get a chance to acclimatize in Dingboche. It is situated at an altitude of 4410m above sea level. This is a gateway to Chuikung Village. This village is surrounded by these stone walls to protect the harvest of Dingboche village. Take your time and enjoy the village of Dingboche and overnight stay in this place.

On the seventh day, you need to head towards the Lobuche and its total distance is about 9km from Dingboche. The total time is about 6 to 7 hours walking to reach Lobuche. You will get chased to see the beautiful Khumbu glaciers. You should have your overnight stay at Lobuche for tomorrow’s trek.

The day eight is the important day for the trekker which you are waiting for the long time. The total distance between the Lobuche and Everest base camp trek is about 3.5 km. After trekking throughout the moraines and streams to reach the destination of Mount Everest right in front of you. Here you can even experience like Ice falls, like the Khumbu glaciers. After this return back to Gorak Shep and overnight stay at this place.

On a ninth day, Start your hike in the early morning to Kala Patthar at 5545m and enjoy the sunrise view over Mt. Everest, Mt. Lhotse 8516m, Mt. Makalu 8481m, Mt. Cho Oyu 8201m and other surrounding peaks. Spend some time at Kalapatthar and ascend back to Lobuche. Overnight stay at Lobuche.

During this day you will start your hike early morning from Lobuche and reach Chhukung by 6/7 hr hike.

On the eleventh day of the trek, you will lead towards the Island peak base camp. It can be done without any prior climbing experience. It lies at the altitude of 5,200m or 17,060ft so you need an ice ax, climbing boots, and rope for climbing island peaks.

On the twelfth day of your pre climbing training starts today after breakfast. Our trekking crews will provide you climbing techniques and proper ways of using climbing gear such as climbing boots, peaks, ice axes, harnesses, crampons, ascenders, etc. They will be given a rope to climb to go up. If you have some previous climbing experience then it will be much better for you.

You need to wake up early around 12 to 1 am and have some breakfast before starting your adventurous trip. This is more important to reach a summit before the afternoon because the strong wind will make some barriers.

On the fourteen-day trip, you need to take a trip back to Tengboche Monastery. Today you can see fascinating cultural dances and rituals of sherpas here in Tengboche. Overnight stay at tea houses Lodges.

Take a peaceful walk from Tengboche to Namche bazaar through climbing downhill. We reach Namche Bazar by afternoon and off to bed before spending our final days on the mountain. Overnight stay at Namche.

Taking your breakfast you need to be ready to head back to Hillary suspension bridge to reach Lukla. When you arrive at Lukla you will be provided a proper hotel, traditionally, a party with your trekking guide and crews. This can be said as the last day in the region of a gateway to Mount Everest. Overnight stay at Lukla.

On the last day of the trek, early morning flight from Lukla to Kathmandu. This is how your journey began and ends. Transfer to the hotel. Farewell dinner at the best Nepalese dinner in town at Evening

What is included in Island Peak Climbing with EBC 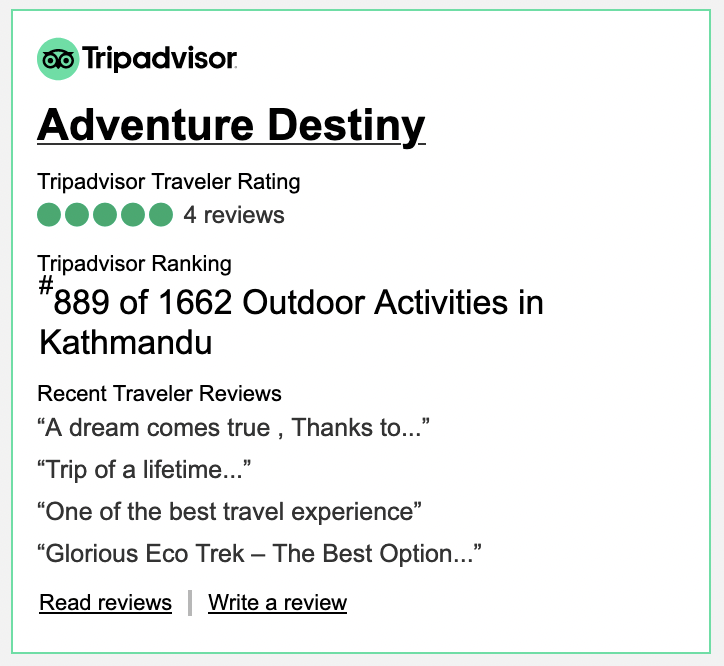